Why I attend an anglican bible study [re-post]

The response when I tell people this (who know I'm Catholic) is invariably one of confusion. "But... why would you want to do that? Aren't you Catholic?" :s

Well, there are a number of reasons!

1. The wounds that disunity in the Body of Christ has caused grieve me deeply

I think the divisions in the Body of Christ are a cause for great scandal. Unity will not happen with the majority of our Protestant brethren via institutional dialogue, because many have rejected a hierarchical understanding of the church, and so mostly operate as local congregations. Thus, dialogue must take place in the context of authentic friendships, which will not just happen. We must seek each other out in love, willing the good of each other, helping each other to daily draw nearer to Christ. If we are not intentional about it, we will remain mostly in our own circles, a recipe for things remaining as they are.

Just to be clear though: this is not about "befriending" and then just waiting and hoping that the other will convert, with friendship as the means to an end. Rather, it is about desiring that every person possess the Ultimate Good, which is the only thing that will truly fulfil them, namely, God. But not just any conception of God. The fullness of God as He has revealed Himself, in the Word made flesh. As Catholics, we believe the Church and Christ are "just one thing, and we shouldn't complicate the matter." (St Joan of Arc) In other words, the Church Christ founded is His Body, the Incarnation continued, and therefore to encounter the whole Christ, as He intended, one cannot be separate from His Church. As Christians, we desire every person to have this encounter, since we love everyone. But even more so for our family and friends. Thus, a desire for the other to know the Truth is inextricable from a genuine friendship. The friendship is not the means to the end, rather both parties coming to know God and being transformed by that encounter is the end of all true friendships.

Thus, I imagine it would equally be the desire of a non-Catholic who thinks that Catholicism is wrong that their Catholic friend come to know the truth, because they are friends, they love them, and they want the best for them Excellent! But the fact of whether one party "converts" or not should be independent from the reality of the friendship, which will endure regardless, if it is authentic.

If this still sounds somewhat utilitarian, consider how the Apostles evangelised. Did they continue with their normal lives waiting for random opportunities to share Christ? No! They left everything, travelled around specifically so that they could bring Christ to those who didn't know Him, establishing Churches. How did they do this? By preaching, certainly, but also the witness of their lives and their genuine love for all those they met. They stayed for weeks or months in a place, developing genuine friendships with people, and it was in that context that many came to Christ.

So, if this is really where I think our responsibility lies, then I can do no less than to act on it in some way. And going out of my way to go to a non-Catholic gathering is one of the ways I have done so.

2. Pursuit of the Truth

Continuing in the above vein regarding Truth, if I'm wrong in being Catholic, I'd like to know about it. And if I'm right, and the Catholic Church is the one founded by Christ, then that fact is so mind-bogglingly awesome, that I want other people to know it. We are all searching for the truth, and so if we want the best for other people we will necessarily wish them to know the truth. And getting them to know the truth involves telling them what you think.

This applies especially to my separated brothers and sisters in Christ. If Catholicism is true, and contains the fullness of the Christian life as Christ intended it to be, then Protestants are really missing out. It's heartbreaking to see people who obviously love Jesus earnestly, but can't experience the profound riches the Church has to offer, Number One being the Real Presence of Christ in the Eucharist. How much would I have to hate someone NOT to tell them about the unbelievably amazing things they're missing out on?

However, just telling other people your position without listening to theirs, or doing so and completely excluding the possibility that you are wrong, never works. From the other person's perspective, they think they are right, and as long as they unwaveringly stick to that mindset, it won't matter what awesome argument you give them, they won't listen.

Progress is only ever made when two people, in mutual respect, bring their thoughts and arguments (here I mean logical arguments, not heated and angry debates) to the table, and come ready to admit that they were wrong if the evidence so persuades them. That doesn't mean never being certain you are right (as obviously there is an objective truth), it just means being open and humble enough to honestly listen. (However, such conversations don't in reality happen that often at bible study. I don't like to derail the flow of discussion to go off on what would look like a massive tangent to everyone else but to me seems very much related.This is due to the phenomenon of Catholics being able to agree with a lot of things Protestants say, but with the caveat, "Oh, but what about this? Without it you're not getting the complete picture!" E.g. Both would agree that the Church is the Bride of Christ, but from the Catholic perspective this is closely linked to the Eucharist, as the Bride becomes one flesh with Her Bridegroom in the marriage supper of the Lamb, and thus truly becomes the Body of Christ.)

This is why I love it when people try to convert me. It's great! It means they care enough about the fact that (from their perspective) I don't have the fullness of the truth, and they want me to know it. Awesome! This means we can have a real discussion!

3. I love thinking about the differences between Catholic and Protestant Theology

The more I learn about paradigms other than my own, the more I understand other people, as well as why I'm Catholic. Precisely because I can't really understand how anyone can look at the evidence and not be Catholic, I find learning about other's positions really interesting. It's also a great exercise in compassion and understanding, trying to get inside someone else's worldview.

4. I learn a great deal about communal Christian life.

I'm attending for my second year running. In the first year, one thing that really impressed me was the way that this church went about doing life together. It was more than just an hour on Sundays. Pretty much everyone commits to attending weekly bible study, and making it a priority. They also commit to contributing to church life in some way, whether it be by leading a junior bible study, cooking dinners for after church (for the whole congregation!), meeting up with particular individuals to read the bible together (extra to their personal reading, and to bible study), being intentional about getting to know everyone in the church, knowing what's happening in people's lives and what they're struggling with, and finding ways to help and support them. The culture is one that promotes the attitude towards the people you go to church with as a family, and it's beautiful to behold. This is something very much lacking in pretty much all Catholic parishes, and it's appalling. I'm learning lots about what a vibrant community of love should look like in action.

5. I'm studying Theology, and would like to be able to communicate what I learn effectively.
This only happens when I practise communicating it. (Although as I said before, this doesn't happen all that much, so it's a lesser reason.)

6. I'm not great at unravelling Scripture, and it's good practise.
Unfortunately, for a number of reasons, personal reading of Scripture is encouraged and recommended in no uncertain terms by the Church (in her documents and Sacred Tradition, and by all the Saints), but in practise, too few of our shepherds see it as a priority. However, there is hope! This is on the mend, happily. But change will be slow. 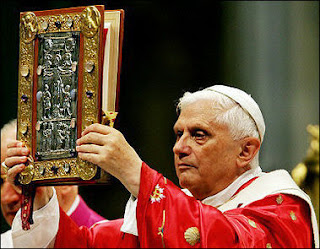 7. It's just good to read God's Word in fellowship, and it's hard to find Catholic bible studies.
I'm hoping to contribute to rectifying this in some small way.

Here's what we do:
7:30- arrive, pray briefly and have dinner together. It's prepared by a different person each week, and we all chip in five bucks to cover their costs.
8:00- begin with prayer, then read and discuss Sacred Scripture. A page with questions is passed around so we can take notes. Attention is always given to application to real life.
9:00- everyone shares what are apparently called "prayer points". These are just things you'd like people to pray for. Everyone prays for someone else (aloud!). Except me. I really can't do the praying aloud thing. Unless it's the Mass or something.
9:30- official end time, but frequently we end up chatting for a while longer, accompanied by hot chocolates. (or tea, etc.)

In conclusion, bible study is awesome.